At the end, there will be only one… What would be the result of a confrontation between several ants colonies, among which are the most dangerous in  the world ?

To answer that, , the research team from the Laboratory of Ecology, Systematics and Evolution (Research Unit 8079 – University of Paris-Sud / CNRS (National Center for Scientific Research) / AgroParisTech) investigates pairwise interactions among four highly invasive species at the   colony level, in a study published in the journal Basic and Applied Ecology. For Cléo Bertelsmeier, who led these studies during her doctoral thesis, indeed globalization and ongoing climate change are likely to increase the rate of future ant invasions  , leading to simultaneous introductions of several highly invasive species within the same area. Under these conditions, the research team established a general hierarchy among the species (W. aurop-unctata/L. neglectus > L. humile > P. megacephala) in order to predict which of them  would prevail. According researchers, this is the first medium-term experiment with invasive ants which records  the dynamics of colony interactions on a daily basis.

Amongst invasive species, ants are a particularly prominent group that create enormous impacts on native biodiversity and ecosystem functioning. With 12 000 species already described, among which six hundred  were observed outside of their native regions, and  nineteen  catalogued as invasive, it is evident that their proliferation causes both ecological and economical damages. The IUCN (International Union for Conservation of Nature) even classified the four species in this experiment as a part of the “100 of the world’s worst invasive alien species” list.

During the experiment, each colony consisted of  three hundred  workers and one queen. The ants were collected from  March 2012 to  May 2012 in New Caledonia (W. auropunctata, P. megacephala) and  Southern France (L. humile and L. neglectus).   Daily interactions  were   observed in June and July 2012. The number of surviving workers in the competing colonies was recorded daily over seven weeks. To increase realism, the research team provided the species with sufficient space to avoid confrontations (unlike  small petri dishes) and  monitored the daily survival   over  forty-two  days. Colony fragments were maintained in plastic nest containers (55 × 35 × 25 cm) filled with substrate from the original nesting site (soil, wood, leaves) and contained several tubes of water. All colonies were in good health before the start of the experiment and no mortalities were observed due to laboratory conditions.

Connecting the foraging arenas of four species of the most invasive ants, W. auropunctata, L. neglectus, L. humile and P. megacephala, resulted in immediate aggressive interactions in all cases. After intense fighting within the first hours following colony connection, fragments of both colonies survived and declined progressively. The least dominant species was P. megacephala, which always went extinct. Interactions among the three other species showed more complex dynamics, rendering the outcome of the interactions less predictable. Overall, W. auropunctata and L. neglectus were the most dominant species. Although L. neglectus had a lower initial decline,   it’s rate of declination would increase until  extinction. In contrast, L. humile declined more rapidly the first day of the interaction with the proceeding rate of decline slowing down   resulting in the species’ survival   with two dozen individuals.

Behavioural experiments using 1:1 (man-to-man / ant-to-ant ?) worker interactions have shown that the two high-ranking species, W. auropunctata and L. neglectus, use mainly chemical defenses , while the two lower-ranking species use mainly physical defenses  when paired with one of the three other species (Bertelsmeier et al., 2015a). It is notable that the most dominant species, W. auropunctata, also has the smallest body size. P. megacephala and L. humile  rapidly invaded the arena of the opponent species, leading to a high proportion of fights occurring on the territory of the opponent. In contrary, W. auropunctata and L. neglectus were slower, more passive explorers. Interestingly, the species with the highest tendency to invade the opponent’s territory suffered the highest mortality. This suggests that the two species with strong exploratory behaviour were less competitive through interference. This strong exploratory behaviour might however confer an advantage through exploitation competition. Nonetheless, it has been suggested that invasive ants can break this discovery dominance trade-off by excelling at discovering and dominating resources (Holway, 1999). 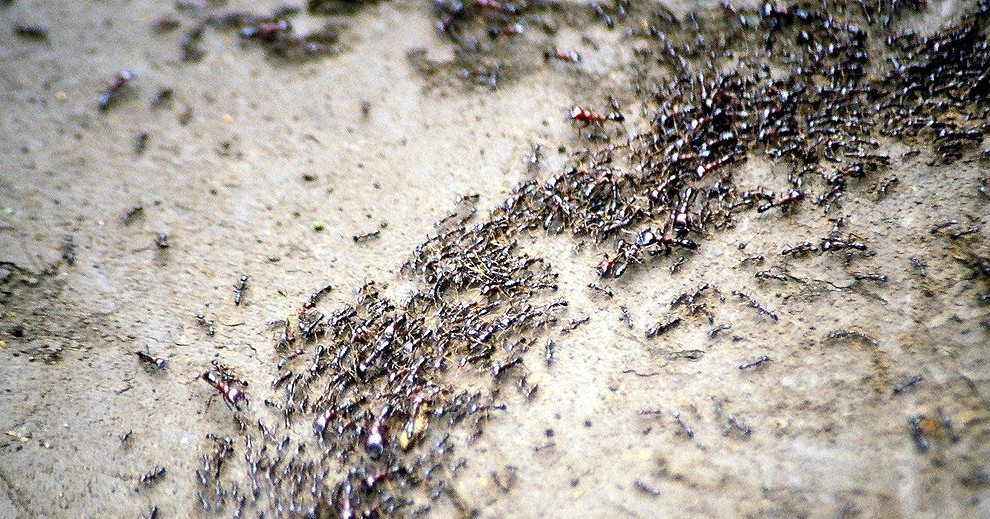