Climate change and biological invasions are part of the greatest threats to biodiversity, and their impacts may increase by the end of this century. Within those threats, ants are among the worst invasive species : currently, the IUCN (International Union for Conservation of Nature) recognizes 19 ant species as highly problematic, and five species are even on the “100 of the world’s worst invasive alien species” list. Heretofore very few studies are available on invasive species in biology and ecology. Nevertheless, research team from the Laboratory of Ecology, Systematics and Evolution (Research Unit 8079 – University of Paris-Sud / CNRS (National Center for Scientific Research) / AgroParisTech) examine, in an article published in the journal Myrmecological News, the mechanisms by which climate change will affect future of ant invasions and whether their interaction could lead to a synergistic effect.

” Climate change may boost biological invasions because the distribution of many invasive species is currently restricted by thermal barriers (too low temperatures), and climate change could enable them to invade higher latitudes”, Franck Courchamp, CNRS researcher who carried out the study.

” Global biodiversity is currently facing a major crisis”, analyzes Franck Courchamp, CNRS researcher who carried out the study. ” Climate change may boost biological invasions because the distribution of many invasive species is currently restricted by thermal barriers (too low temperatures), and climate change could enable them to invade higher latitudes”, underlines the researcher. Indeed, ants are a particularly interesting family to be studied from this point of view, with 12 000 species already described, among them 600 were observed outside of their native regions, and 19 catalogued as invasive, their proliferation causes both ecological and economical damages.

The article reminds that according to previous models, the climate change would increase the suitable areas within the biodiversity hotspots of  5 out of 19 invasive species of ants: Monomorium destructor (+ 19,7 %), Solenopsis invicta (+ 16,3 %), Paratrechina longicornis (+ 8,5 %), Solenopsis geminata (+ 7,4 %) and Monomorium pharaonis (+ 3,7 %). A real threat for the biodiversity, knowing that Solenopsis invicta is already on the “100 of the world’s worst invasive alien species” list.

The presence of those invasive ants reduces native ant’s diversity, displaces other arthropods, and negatively affects many vertebrate populations. This adversely affects ecosystem functions, e.g., seed dispersal and soil chemistry. In addition, invasive ants can damage electrical equipment, invade buildings, they can transmit diseases and sometimes sting and cause anaphylactic shock, which can be fatal. Moreover, they may be a real nuisance in agricultural areas, as well as they can cause a decline in production.

However, scientists have shown that invasive ants will not systematically benefit from climate change; responses are predicted to be heterogeneous across species. Actually, four further species (out of 19) are predicted to suffer from climate change: the black imported fire ant, Solenopsis richteri; the ghost ant, Tapinoma melanocephalum; the white-footed ant, Technomyrmex albipes; and the electric ant, Wasmannia auropunctata. Acording to the research team, the other ten invasive species of ants should not see their area of invasion modified by the climate change.

More interesting, this study bring a whole new perspective in the predictive mechanisms, as depending on forecasts in 2020, 2050 or 2080, ants potential distribution evolve with climate changes. Some species can experience a population boom, soon followed by a rapid decline. Indeed, the consequences of the climate change on the beginning can be beneficial to a species and  thereafter can suddenly worsen for instance, when conditions like temperature or humidity exceed their optimal value. The environment become gradually unfavorable after an ideal peak. 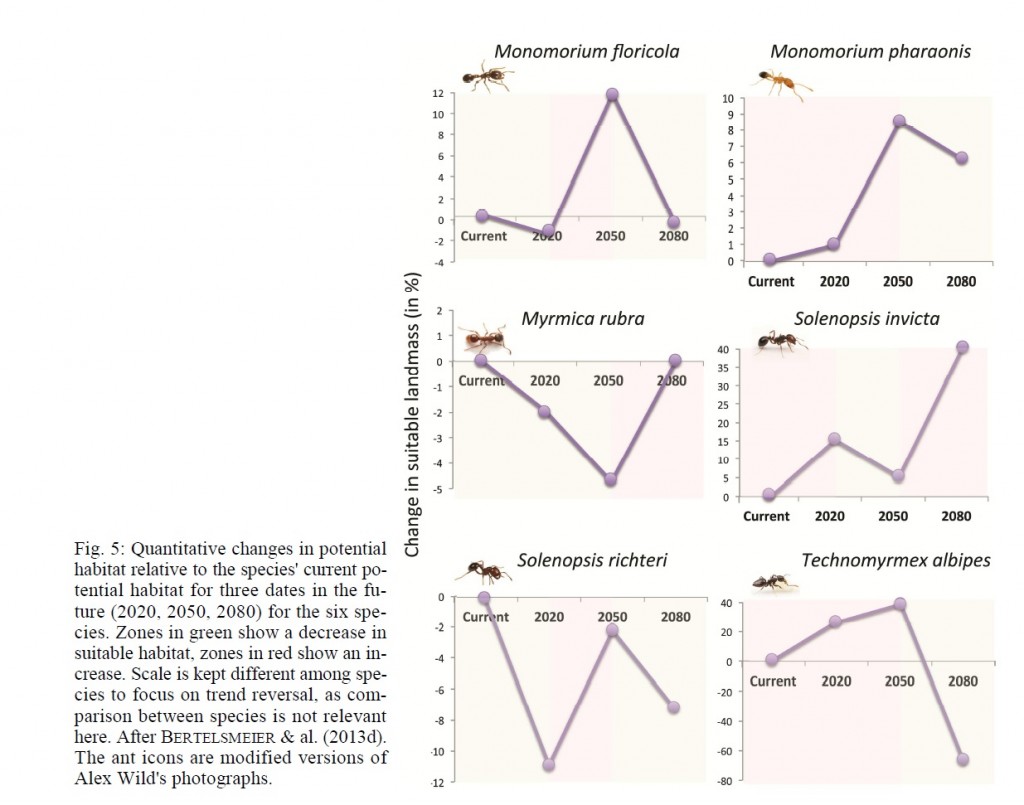 Uses of the study

This study allows to alert the administrators of high-risk areas to handle the damages before they can become too severe. Indeed, localizing the zones of potential invasion, as well as the zones where the risk of damages will be the most important will allow to set up of better prevention policies and to better concentrate the efforts of prevention and protection. Nevertheless, these models do not take into account all the parameters which could influence the proliferation of ants. Future studies will have to integrate the microclimatic conditions of the related regions, without forgetting to justify the choice of the temporal window of the projection.

How to create a predictive model ?

As a first step, the species occurrence data are mapped, and each occurrence point is matched with a set of climatic variables (e.g., mean annual temperature, rainfall of the wettest month). Then, an algorithm is applied to describe the relationship between a species’ current distribution and the climatic data. This model can be subsequently projected onto maps of current or future climates to identify areas of suitable climatic conditions.

Authors of the magazine(review): Cleo Bertelsmeier, Olivier Blight and Franck Courchamp
Source(Spring): invasions of ants (Hymenoptera: Formicidae) in light of global climate published exchange in Myrmecol. New 22: 25-42; ISSN 1994-4136 print ), (on-line) ISSN 1997-3500; 2015 received 11 March; revision received 28 July on 2015; 2015 accepted 31 July; Editor subject: Nicholas J. Gotelli
The work of Olivier Blight was financed by a subsidy Biodiversa Eranet and Franck Courchamp was financed by a subsidy of the foundation BNP and a subsidy of the ANR.