We consider that an invasive species is an exotic species whose spread has a negative impact on its new environment (ecological or socioeconomic damage). However, species that are introduced are not all invasive. Let’s consider what are the reasons of those introductions and how an invasion is made possible.

In order to spread around the world, species are more likely to use human accomodation than their own capacity. Often, they just have to come into contact with some transport e.g. boats or cars to reach new regions, even if some insects are able to relocate through long distance by flying.

Sometimes species are introduced on purpose in order to complete biological controls (see the asian Ladybird), or for breeding (see the gypsy moth). Occasionally, this introduction can get out of control. Also, the bloom of global commerce enabled to transport merchandises and people all around the world in short period. Insects are kind of hitchhikers in this exchange, using human transport to relocate in new areas, where conditions stand often against them. However, for some species, the conditions of the new environment can be suitable for their expansion.

Although, even in case of the expansion, this is not enough to classify them as an invasive species.

Some still resist to Invader

The human-led environment modifications (such as monoculture, extensive deforestation, pesticide use and much more), stir up the erosion of local biodiversity and can leave vacant niches. But even if a species settle in an ecological niche it does not necessarily mean that it will proliferate subsequently.

The stages of a spread

We distinguish three stages of an invasion, each one includes several obstacles. 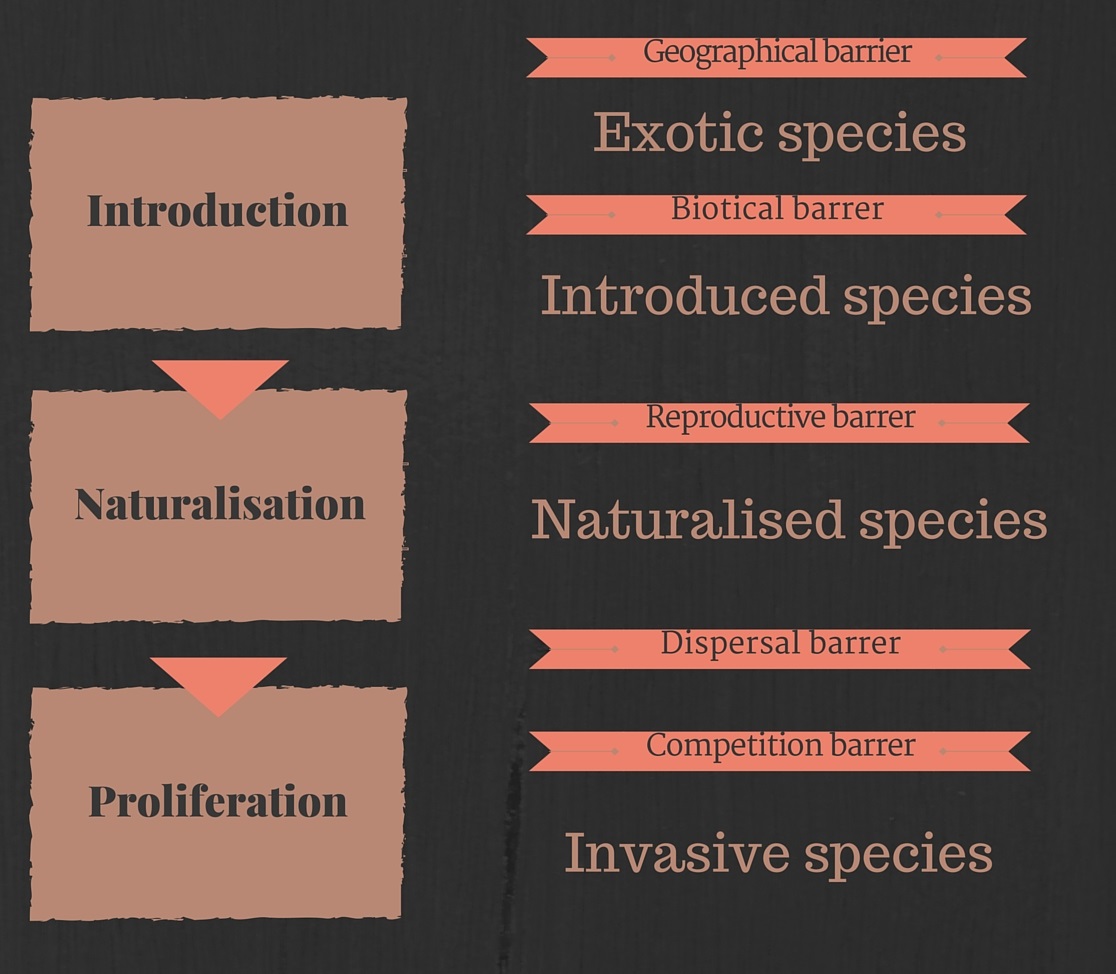 Why do we link invasions and climate changes ?

It is estimated that the climate and land use changes could cause drastic transfer of species’ distribution (Bellard et al., 2013). Unfortunately these changes take usually place at the most vulnerable species’ expense, and are favourable to strongest ones. The anthropogenic modifications and those imputable to climate change make the ecosystems less resistant to invasions, whereas global warming could lead to the acceleration of introduced species’ dispersion as well as to the expansion of their territory scope.

In fact, the distribution of invasive species is nowadays still limited by thermal barriers (the temperatures are too low to make the proliferation of species possible). However the climate change could help them to invade the highest latitudes. Moreover, new distribution is going to lead to new ecological interactions whose consequences are difficult to predict. However, what we know so far is that most of the time the consequences will be negative in terms of local ecosystems as well as economy and people’s health.

Invasive species introduction is the third trigger of biodiversity decline in the world ( after habitat degradation and overexploitation), according to IUCN.

We can assess the negative effects and costs of invasive species by dividing them into different groups:

All those groups contain the cost of treatment in order to repair damage and cut down or eradicate the spread of problematic insects.

The exact cost of invasive species disturbances is still unknown and often underestimated. For instance potato were introduced in Europe at the end of 16th century and over their invasion the scientific community was not yet able to collect and assess data concerning the consequences of their spread. Nowadays, even with scientific refinement, we lack of data to estimate the consequences of invasive species on environment and biodiversity.

That is why the InvaCost’s team seek to clarify and study together the consequences and future costs of invasive species.